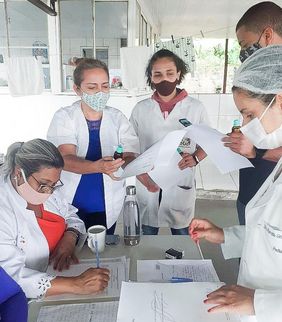 You can unsubscribe at any time by clicking the link in the footer of our emails. We use Mail chimp as our marketing platform. By clicking below to subscribe, you acknowledge that your information will be transferred to Mail chimp for processing.

Recently, Brazil has become the country with the second highest number of COVID-19 cases. In April 2020, a COVID-19 task force, consisting of ten anthroposophic doctors, started working under the Brazilian Unified Health System (SUS) in six municipalities in the state of Minas Gerais (south-eastern Brazil). Anthroposophic medicines offer the potential to strengthen the immune system, support the treatment of flu-like syndromes and COVID-19, as well as control mental and emotional symptoms (stress, anxiety, and panic). So far, three different focus groups of patients have received anthroposophic remedies: 1) Vulnerable and at-risk populations for COVID-19; 2) Patients with flu-like symptoms and with suspected or confirmed COVID-19 and 3) Health professionals. In compliance with Brazilian law, medicines are distributed free of charge to patients in SUS.

The COVID-19 task force is organized by the Brazilian Anthroposophic Doctors Association in the Minas Gerais region (ABMA-MG), together with Association Yochanan. The anthroposophic medicines are being produced by the public magistral pharmacy located in the municipality of São João Del Rey. A remarkably successful public fundraising campaign (crowd funding) was carried out to buy starting materials for the production of Anthroposophic Medicinal Products (AMPs). The Mahle Foundation also contributed significant funds, sufficient to produce more than 30,000 bottles of medicine. In addition, medicines were donated by Weleda and Sirimim pharmacies. To date, around 10,000 bottles of medicines have been distributed. In parallel, data are being collected for an academic study.

This model for addressing the COVID-19 challenge is based on a 2019 Task Force formed to assist victims of the ore dam rupture in the municipality of Brumadinho, which took place in January 2019. For one year, a team of volunteer anthroposophic doctors has been assisting the population of the locality where this disaster occurred, accompanying 150 families by providing medicines produced by the pharmacy in São João Del Rey. Additional donations came from Weleda, Sirimim and Injectcenter (another pharmacy) for this work. In addition to medical care, there were the task force also undertook actions towards trauma management.

AMPs have been recognised and regulated in Brazil since 2007.

The public magistral anthroposophic pharmacy, located in the municipality of São João Del Rey, was created with the aim to support the work of the Center for Medicine and Anthroposophic Therapies in SUS. It was founded more than 15 years ago by Dr. Paulo Maurício de Oliveira, an anthroposophic doctor and professor at the Federal University of Minas Gerais. For many years now the pharmacy has produced medicines, also for social outpatients’ clinics and humanitarian task-forces organized by ABMA-MG.

GDPR Information
You can unsubscribe at any time by clicking the link in the footer of our emails. We use Mail chimp as our marketing platform. By clicking below to subscribe, you acknowledge that your information will be transferred to Mail chimp for processing.

Menu
Menu
Menu
This site is licensed under Creative Commons; some rights reserved. You are free to share IVAA content, with attribution, so long as it is non-commercial and unmodified from the original. More details here.
LOGIN

Cookies for analytics: IVAA uses cookies to generate anonymous user statistics to make our websites more user-friendly. We do this through Google Analytics, a web analysis service offered by Google Inc. (Google). Google uses aggregated statistical information to provide IVAA with an understanding of how visitors are using our websites. To protect your privacy, we have configured Google Analytics to only store part our visitors’ IP address and to not share data with others. Google may only provide this information to third parties if it has a statutory duty to do so or to the extent that the third parties are processing the information on Google’s behalf. We have signed a data processor agreement with Google. We use the following cookies for this purpose: _ga and _gid. These are stored for 26 months.